Well, on this particular unit, this hose it says here, attached this into the helmet because inside this hose is a stainless-steel mesh and it also has some padding in around the mesh as well.

So, it does two things. It maintains a temperature that sent from the air-conditioner up into the helmet. So, if I put around the wrong way, what you’ll find is you have all this white stuff coming out in your helmet because if you put it around the wrong way the air starts picking up the padding in behind the stainless steel mesh and starts sending it through to you.

So, in a hot environment, it says on one side of this ‘cold’. So, the ‘cold’ is sent from the air line into this planetary. The planetary then sends it whichever way the directive is. So, in this instance, it’s going to the helmet and it says ‘cold’ because these holes here are large. So, it doesn’t give the air the opportunity to warm up through a smaller hole but if you have a look on the other end of this unit that says, hot.

So, if I take this exhaust part, poured off; you’ll see that in the end of this, there’s a series of small holes. Now, as you can see, because it’s a blast helmet, it’s got remnants of abrasive dust in there. That’s why it’s important to keep all this stuff clean. Clean it overnight. Blow it out if you have to. Give it a rinse. Blow it off again. Put it back together. Reassemble it.

So, where it says ‘hot’, if I was in a cold environment and I was getting a headache because the air was too cold. I can invert this unit and put the exhaust on the bottom and put the hot end on this end of my shirt. Now, I’ve got nice warm air coming into the helmet.

There’s a big mistake made with these particular units, primarily because, people seem to think I need to have that open. Well, it’s an exhaust. So, what happens is because it’s only a small hole that feeds true from the tapered end of this particular valve end.

So, before the air can come up to me whichever end I select. Particularly, if you’re doing hot warm air. You can see the holes are bigger so that where more air escape through this exhaust port.

If I had that open, of course, we’ve got a small hole. What’s the consequence of that? That’ll get warm, small hole, a lot of air passing through, becomes hotter. So, the fatal mistake that people make is and I say it’s a fatal mistake because it’s actually quite dangerous.

If I attach this to my belt and wrap this around myself like so. A lot of guys have it pointing down which is the correct way because the helmet will be attached on the top of that.

Now, what happens as we blast during the course of the day that’ll move around like so. So, you’re actually pointing something that has the capacity to inject the air into me at a very sensitive part of your body. If it’s exhausting, it’s hot, and also too when you bend down, you run the risk of injecting yourself with air. Is it possible? Absolutely.

So, the ears not only hot and if it bumps against my leg. I think, “oh, it’s hot!”. Not only that is you run the risk of injecting yourself now. I’ve seen guys put rubber plates on there so that they don’t burn themselves.

In this Primed Insight we sat down with CEO of BlastOne International to talk about the new Snakebite XQ Nozzle.…

Noise pollution is a big issue in the blasting industry – and we have a solution. We tested our quiet… 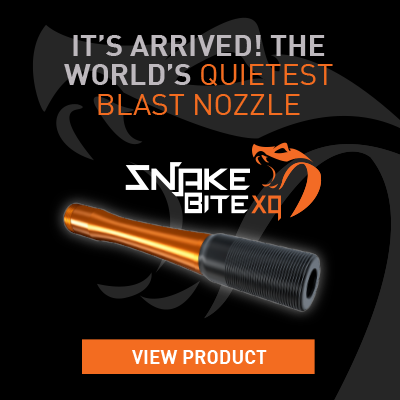