Two years ago, J. Oskam realized that their surface preparation and coatings facilities were not delivering the same quality and performance levels as the other parts of their production services.

At that time, they were using silica sand, and despite being in southern Canada, they only had a converted storage area that was used for blasting. In addition, they were subcontracting out up to 40% of all of their largest painting projects. As part of their strategic plan, J. Oskam wanted to bring their blast and paint fabrication processes inside to improve their speed and delivered project quality. 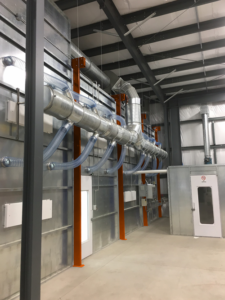 BlastOne was one of several companies approached to provide potential solutions for the needed process improvements, and was the only company to make a site visit to gain a full understanding of J. Oskam’s facilities, operating environment and strategic plans.

As a result of site visits and consultations with J. Oskam Steel Fabricators, BlastOne was able to make the following recommendations. 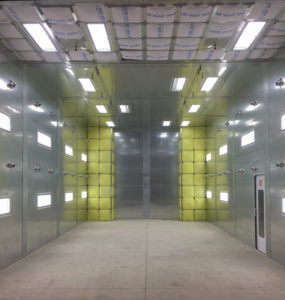 Once J. Oskam made the decision to work with BlastOne, we exceeded their expectations with a speedy delivery and installation of a turnkey solution.

Within the first year of using the BlastOne’s custom blast booth, J. Oskam increased total production with only half as many operators, decreasing from 12 to 6-7 operators. The new paint cure system also reduced cure time down from 12 hours to 3-4 hours. One of the benefits of the time saved with the new facility was more time available for final assembly, which lead to further in increases in product quality.

The biggest beneficiaries of the new facilities are the blasters and painters themselves – better visibility, better ventilation, improved work handling and stress-free reliable operation. Happy employees are better employees.

For the J. Oskam management team, they have peace-of-mind knowing that they have a long term partner in BlastOne committed to ensuring that they maintain continuous cost-effective corrosion control.