Our client is a leading supplier for U.S. Military defense equipment. This order was part of a government contract for manufacturing high technology heavy defense components. BlastOne had previous been contracted to design, supply and install high technology blast and paint booths for surface preparation and coating of these defense related components, and BlastOne was subsequently contracted to design and supply a materials handling solution. The solution needed to be able to move parts up to 50 feet in length and that weigh up to 80 tons in an out of the previously supplied booths.

Upon successful completion of blast and spray booths project, Blast One was approached to help integrate the logistic solution for their large products in the enclosed booths. Overhead cranes were not an option for our client, so a floor-lift system would be required. Blast One integrated a solution that included a tandem, cart-carriage system to provide a safe and accessible solution.
Other design considerations:

Early conceptual design of the solution: 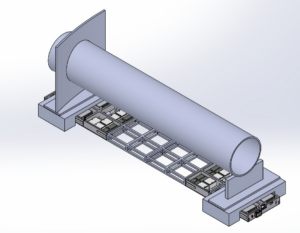 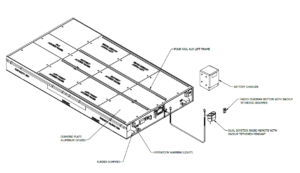 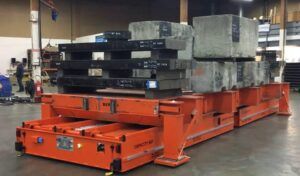 BlastOne’s client now has a safe and effective method of transporting their large products in an out of the booths, as well as many other parts of the plant. Having (2) of the units that can each operate totally independent of each other will provide options for moving heavy equipment throughout the facility.

The Facilities Engineer writes: “Based on our recent project, I would recommend BlastOne as a reputable company to do business with.  The project was handled professionally, communication was sufficient, follow up was good when needed.  Attention to detail was good as well, and the BlastOne Project Manager was a good representative for BlastOne, and pleasant to conduct business with.”