Read - How To Choose The Perfect Abrasive Metering Valve

In this insight we’re going to explain what an Air Prep does, how it works, the common problems experienced when working without one – and why other market solutions, don’t deliver at the same level as this air prep.

What it does:
First – an air prep simply cools and dries the hot moist air coming from your compressor. On planet Earth there exists no atmospheric condition as 0% humidity. All air contains some degree of moisture. As corrosion control experts, your end goal – both during and after the project, is to prevent moisture from making contact with the steel surface. At least minimize this to the degree you are able. An air prep moisture removal system maximizes the odds of you accomplishing this goal.

How it works:
Let’s start with your air compressor. This equipment basically compresses 7 cu ft of air down to a single cu ft. That’s what creates the pressure. In so doing it also compresses whatever moisture is in that 7 cu feet and transfers it into the 1 cu ft used for blasting. Can you see the problem?
Each cu ft of air now contains 7x the moisture of the surrounding ambient air. And this will be concentrated and directed first into your blast pot full of abrasive and then onto the steel surface.

Our best air prep condenses and reduces this moisture in 3 separate phases – before the air ends up in your blast stream. 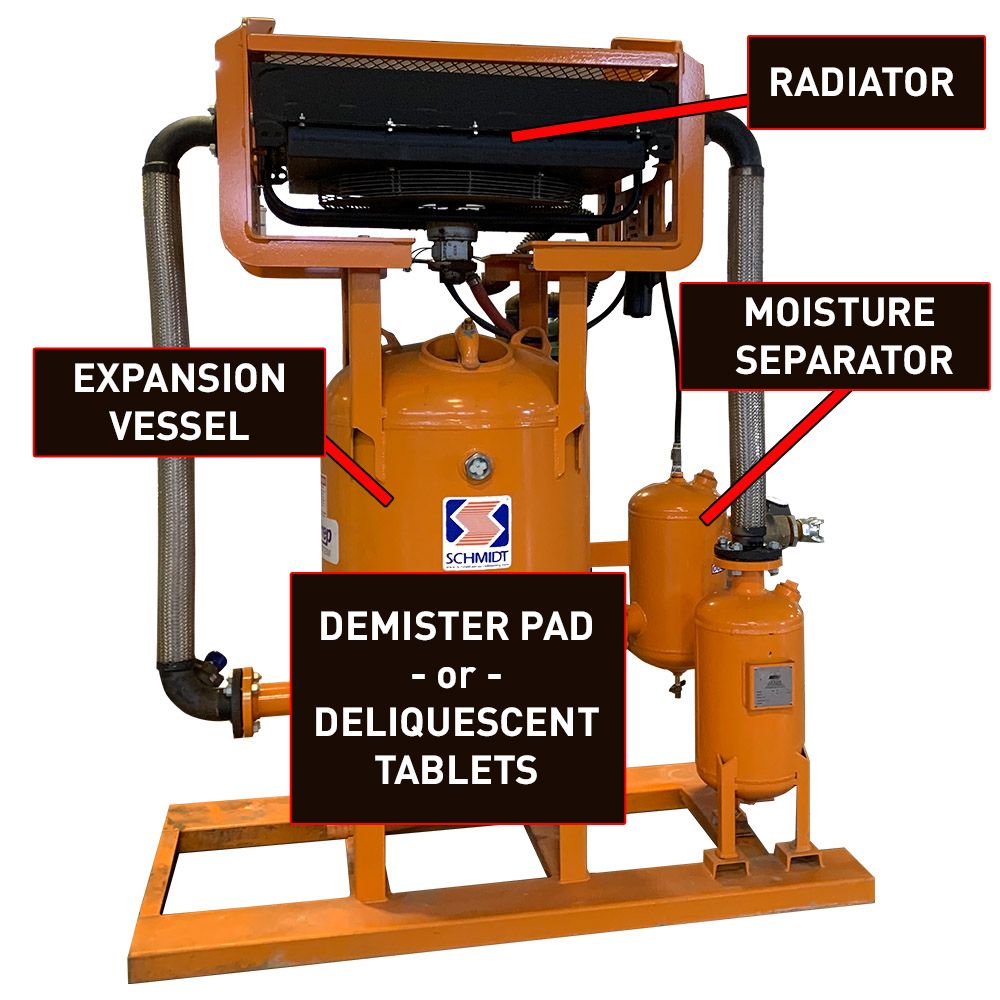 PHASE 1: First, the air from the compressor enters an inlet moisture separator. Basically, this acts like a drop out box and the heaviest moisture molecules fall out of the air stream. This is the first line of defense.

PHASE 2: Air coming from the compressor is extremely hot. Around 200 degrees F /90 degrees C. After passing through the inlet moisture separator, it then runs through a radiator to help cool it. Cooling the air causes water vapor to condense into water molecules. We want the vapor to condensate because that’s how we’re going to separate it from the air in the next phase.

PHASE 3: After being cooled in the radiator, the compressed air then enters the large tank of the air prep where it immediately expands and spins around the vessel – causing the heavier water molecules to separate from the air flow and drip to the bottom of the tank.

Our ACS and Squat style Air preps have a Stainless Steel Demister Pad – whose bristly surface captures and helps to coalesce the moisture.

Our ADS style uses Deliquescent tablets – which act similar to salt, in that these lower the dewpoint of the air lower than the ambient temperature, so we can condensate even more vapor. These ADS style air preps provide you with the driest air available for blasting. Setup correctly, you will never get moisture in your blast pot or at your nozzle.

Here are those 5 common headaches an air prep remedies. These are common problems found on basically every jobsite we visit, that isn’t using an air prep.

The first 3 problems all deal with moist abrasive.

Let’s imagine the hot, moist compressed air travels directly from the compressor into the blast pot where this moisture is absorbed into the abrasive… in essence dampening the abrasive.

This is an extremely common problem. Almost every blaster has experienced this situation. Not enough abrasive enters the blast stream and blasting either suffers or halts.

Now that may seem like the problem – but that’s not even one of the 3 problems we’re exposing.

The 3 problems occur because of the solution the blasters take to increase the abrasive flow. They choke the pot!

And that does work.

However, it works at the expense of 3 very costly side-effects.

Problem #4 is you’re smashing moist abrasive into the substrate – when your end goal was to reduce moisture coming into contact with the surface. Without an air prep, you just increased the probability of flash rust.

And a 5th problem which seems so remote, most don’t even consider it, is when you’re blasting in very cold temperatures. The moisture traveling through the compressed air finds it way not only to the steel surface, but also inside your lines, hoses, and valves. Even your pneumatic deadman controls. When you shut down for the day, that moisture stays inside, potentially freezing overnight and causing complications the next morning on start-up.

You reduce or eliminate all these problems by minimizing the moisture in the compressed air. And the best way to do that is by using an air prep.

Common Objections:
“But I use a moisture separator.”
“My compressor has an in-built after-cooler.”
“I work in mild climates.”
“I’ve used an air prep and it drops my pressure!”

Let’s tackle these objections one by one.

A moisture separator only removes the incoming heavy moisture, it does nothing for moisture at the vapor level. Also, the diameter of these cylinders don’t really facilitate much expansion to shake out the moisture. These are better than nothing. But kind of like putting a Band-Aid on a bullet hole.

In-Built Compressor After-coolers. First, we have found they can lower your pressure up to 15 psi – that’s a 22% drop in efficiency. Our air preps typically have a 3psi drop when the air expands in the vessel to shake out the water. Second, we decided to test the efficacy of an in-built after-cooler by attaching it to one of our airpreps. We wanted to see if the air prep could catch any remaining water that escaped the compressor. The video you’re about to see was shot on a sunny day in a mild humidity climate — so not only does it address the In-built After-cooler objection, it helps cover the mild climate defense as well.

That leaves the final objection – an air prep drops my pressure. This is true. However, an inbuilt after cooler can drop your pressure by 15 psi. A regenerative air dryer can drop it by 10-25 psi. Our leading air preps result in an expected 3psi drop. If your concern is pressure loss, we have a feeling you haven’t tried ours yet.

And finally, the best news is we love to rent air preps. We invite everyone to try before they buy. Just give us a call. You team has a tough job to begin with. An air prep can remove some of their common headaches.

Why Use An Air Dryer?

Bear in mind that the temperature coming out of an Air Compressor is close to 200 degrees F. If this hot air is not cooled it will condense when it comes into the blast pot because the interior of the pot is cooler than the incoming air. Condensation will cause the abrasive to clump up and not flow through the metering valve properly, causing “chugging” and other unpleasant consequences. Utilization of an Air Dryer is guaranteed to increase productivity in a sandblast application.

A real air dryer (AirPrep and Squat Dryer) utilizes a heavy-duty fan as part of it’s after-cooler assembly. This fan is most commonly driven by an air-motor. Air motors, like most rotating mechanical items, require maintenance. There is a FRL (Filter Regulator Lubricator) in-line to keep the air motor from over-heating and seizing up. If this operation is neglected, the negative consequences are costly in both man-hours and repair parts.

Another common issue is if the drain is not cracked open slightly during operation, the dryer vessel itself will fill up with the very moisture it has trapped and will put the water back into the air blasting line. Also, in the case of a deliquescent type, this mistake will also dissolve the deliquescent tablets completely and wash them out of the dryer and require an immediate replacement to get back to optimal efficiency.

1. Size and capacity of your AirPrep

This is obvious, but the first question we will ask you is what you are going to be blasting and how many nozzles, and what size nozzles. Use the table before to choose the right size for your application now and in the future

There are two common fittings used in Australia for air. This is the ‘Spud’ screw fitting or the ‘Surelock” coupling fitting.

We always recommend using 2” Bull hose for running 1 or 2 blasters, but stepping this up to 3” when you are blasting with 3 or more blasters.

Talk to one of our team about what you are planning to blast, and we can get you the right grade of garnet. Buying Guide

How To Test Your AirPrep AfterCooler To Ensure It’s Working

Do You Have A Restrictive Moisture Separator On Your Blast Pot?

END_OF_DOCUMENT_TOKEN_TO_BE_REPLACED

We love to talk to customers and help them make the best decisions when purchasing Air preparation and drying equipment.
You can reach us via our Live Chat, Email, Phone, and Online Form.